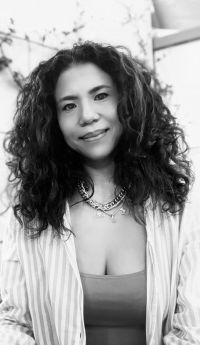 Biografia
Dynamic, spontaneous, ironic, serious, feminine, has a good sense of humor, spiritual and compassionate. An American in Rome and obsessed with it. An artist of all medias including energy medicine. Loves: cats, cinema, ancient history, esoterica, yoga.
Biografia completa / Curriculum Vitae
Song Paradiso is an Alabama native residing in Rome after living most of her life in London as a never-ending University student but found time to be an accomplished singer, musician, photographer, goldsmith, dating coach, painter and Complementary therapist using Energy Medicine and Homeopathy. Deejaying for friends since the age of 3 in the 70s/80s, vinyl from all genres such as Jazz, Funk, Blues, Classical and Rock. She appreciates most music genres but considers herself officially a Deadhead. She is a fatalist and this was reinforced when she had a Spiritual experience in Rome and swears she will never leave but she still travels. She is obsessed about being a great mother, organic living, yoga, UAPs, cinema and music but her guilty pleasures are Reality TV, TexMex tacos, and vegan gelato.
Philosophy: Everything has a Divine Spark